Come and celebrate summer at the center.

Join us for these activities and more.

Download a copy of the Burlington Senior Activity Center June Calendar or stop in and pick up a printed one.

The Burlington Senior Center recently took a bus group to the German Fasching Fest (Mardi Gras) with a great German meal and entertainment by the Dorf Kapelle orchestra. Pat Kendall, who planned the event, said it was so much fun, she would make it an annual event.

Originally Published in The Journal Times by Christina Lieffring, christina.lieffring@journaltimes.com

BURLINGTON — Our Harmony Club Assistant Director Christine Scott said that the first week she saw the inside of the former Knights of Columbus building, now the new Burlington Senior Center, she knew there was a lot of work to be done.

Fortunately, the center had a lot of volunteers to undertake the project.

“They had tons of people cleaning and painting,” said Scott. “It’s amazing to see all the people come together.”

This week, the new facility at 587 E. State St., opened to the public. Burlington Senior Center Board President Kevin Brierly and General Manager Pat Kendall said after the pipes froze at the Western Racine County Service Center building, 209 N. Main St., after New Year’s, volunteers of all ages pitched in some elbow grease to help get the Knights of Columbus building in shape.

New ceiling panels were donated and installed, plumbing and electricity had to be updated and every wall was given a fresh coat of paint.

Brierly said one 93-year-old donated hours of her time painting the walls.

“Since she couldn’t play cards, she thought she’d come on down,” he said.

This week at the new facility kicked off with Chocolate City Card Club, which had about 20 members come in Tuesday. Bingo, held on the second Thursday of the month, also drew a pretty good crowd. Kendall said they have received quite a few comments about how nice the new space is.

Brierly said that the location, access and parking are also a big improvement.

Read the full story on JournalTimes.com

We are moving. The Burlington Senior Center is relocating to 587 E. State St. Our new home is bigger and includes a commercial-grade kitchen so we can participate in the Meals on Wheels program. Want to help with the move? Check out our fall edition of the BSC News.

How do I get a copy?

You can pick up a paper copy at the new Burlington Senior Center location or download a copy of BSC_News_Fall_2017.

Summer is here. We have worked hard to bring you the latest updates and news. The Summer 2017 edition of BSC News is now available. 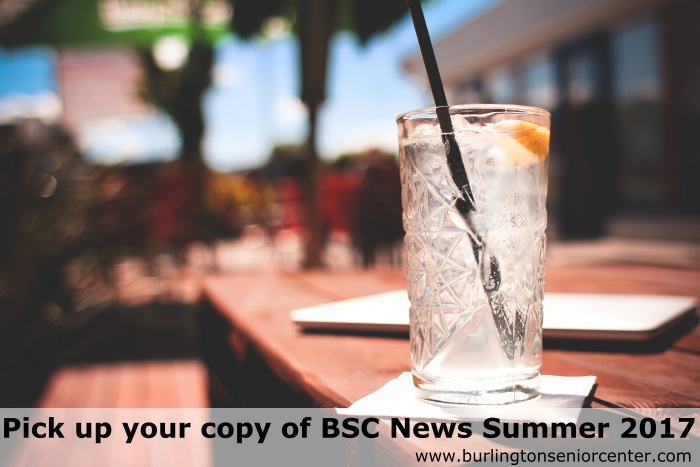 What is inside BSC News?

Where can I get a copy?

You can come to the Burlington Senior Center and pick up a printed copy or download our BSC News Summer 2017 edition.